We are pleased to announce our first concert of the season featuring the award winning, Boston based Beacon Brass Quintet.  The performance will be held outdoors at the base of Cranmore Mountain on August 19, 2021 at 7:00 p.m., rain or shine.  Bring a picnic and outdoor chair or blanket, and enjoy the music of this fabulous group. 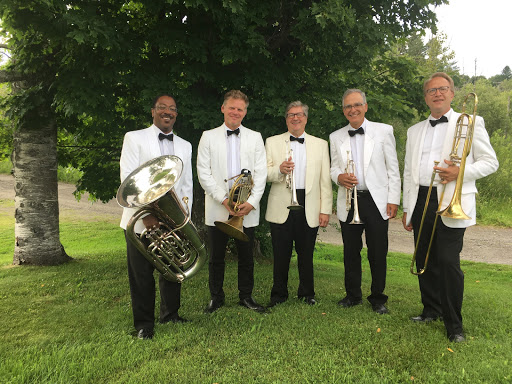 DANA RUSSIAN, trumpet, a North Conway resident, is currently principal of the Pro Arte Chamber Orchestra and a member of the Springfield Symphony. He performed regularly with the Boston Pops Esplanade Orchestra and has toured extensively with them. He also appears frequently with the Boston Ballet, Boston Classical Orchestra and Boston Lyric Opera. Dana has performed with many choral groups including the Masterworks Chorale, John Oliver Chorale, Chorus Pro Musica, Back Bay Chorale and Emmanuel Music. He has performed with the Boston Opera Company, Rhode Island Philharmonic, the Portland Symphony Orchestra, and the New Hampshire Symphony Orchestra. Dana has been an instructor of trumpet at Tufts University, Brandeis University, Wellesley College and Harvard University.

DANA OAKES, trumpet, is currently a member of the Boston Ballet, Boston Philharmonic, Portland Symphony,  and Landmarks Orchestra. He has performed with the Boston Symphony, Boston Pops, Rhode Island Philharmonic, New Hampshire Symphony, and other regional orchestras. Dana is active in contemporary music performing with MusicaViva and Boston Modern Orchestra Project. Dana has recorded for PBS and A&E as a soloist and ensemble player. A graduate of the New England Conservatory he is currently on the faculty at MIT, the Boston Conservatory, and the University of Massachusetts at Lowell.

KEVIN OWEN, horn, is principal of the Boston Pops Esplanade Orchestra, Boston Lyric Opera, Rhode Island Philharmonic and Boston Philharmonic. He has been a soloist with all of the above orchestras, as well as the New Haven Symphony, the Portland (Maine) Symphony, the Pro Arte Chamber Orchestra, the Ocean State Chamber Orchestra, the North Shore Philharmonic, the Boston University Symphony Orchestra, as well as other orchestras. Kevin has toured internationally with the Empire Brass, the Boston Chamber Music Society, and was a first place winner in five chamber music competitions with the Boston Wind Quintet. He attended Boston University, where he was a Dean's Scholar and the winner of the Outstanding Brass Player Award as well as the Concerto-Aria and Boston Pops competitions.

HANS BOHN, trombone, is a member of the Boston Ballet Orchestra, Boston Lyric Opera, Handel and Haydn Society, Emmanuel Music and the new music ensemble, Boston Modern Orchestra Project. A graduate of the Eastman School of Music and Northwestern University, Hans performs regularly with the Boston Pops Esplanade orchestra and can be heard on several Boston Pops recordings. In addition, he is a member of Proteus 7, a chamber ensemble that travels throughout the country performing recitals and masterclasses and has recorded four discs for Dorian Records. Hans performs with symphony orchestras in Springfield, Rhode Island, New Hampshire, Hartford and Portland, and has appeared with the Battle Creek Brass Band, Empire Brass Quintet, Grand Rapids Symphony, the Heidelburg Festival Orchestra and the Orchestra de Mineria in Mexico.  Hans is trombone instructor at Tufts University and University of Massachusetts at Lowell.

KEN AMIS, tuba, has performed as a soloist with the English Chamber Orchestra and has been a member of the Tanglewood Festival Orchestra and the New World Symphony Orchestra.  His performance skills are showcased on many commercial records distributed internationally.

After graduating from Boston University and becoming a licentiate of the Royal Schools of Music, Mr. Amis attended the New England Conservatory where he earned a Master's degree in composition.  In 2003, Mr Amis became the youngest recipient of the Conservatory's "Outstanding Alunmi Award."

Mr. Amis is presently the tuba player of the Palm Beach Opera Orchestra, a performing artist for Besson Instruments, the assistant conductor of the MIT Wind Ensemble, tuba professor at Boston University, Boston Conservatory, Longy School of Music, the New England Conservatory and wind ensemble director at the Conservatory at Lynn University. He also served on the faculties of the Boston University Tanglewood Institute and the Pacific Music Festival in Japan.  In 2007, he was composer-in-residence at the South Shore Conservatory in Massachusetts.


Thanks to Everyone Who Turned Out to Our 2019 Event! Here are details, hopefully, on our next Seacoast Wind Ensemble Concert! 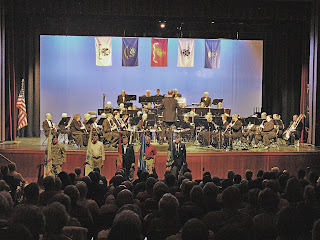 The annual Memorial Weekend Concert featuring the Seacoast Wind Ensemble usually takes place during Memorial Day Weekend each year. The concert traditionally is enjoyed at the Leura Hill Eastman Performing Arts Center at Fryeburg Academy. The Fryeburg venue is not available for a Veteran's Day concert this year, as school will be in session. WMMA is hoping to have a performance by the Seacoast group to commemorate Veteran's Day in November, and is awaiting approval from the Conway school department to feature the group at Kennett High School.

The performance by the Seacoast Wind Ensemble - a Sousa-style 50-piece band - has been underwritten by Col. Karen and Lt. Col. Jim Umberger US Air Force Retired, whose generous donation permits the public to attend this exciting concert without a charge for admission. Donations to support future WMMA concerts, however, will be gratefully accepted at the door.


The ensemble, established in 1984, is a 50-piece symphonic band based in Kittery, Maine. Comprised of musicians from all occupations and trades, the group performs annually throughout seacoast New Hampshire, as well as in the White Mountains, southern Maine, and northern Massachusetts. Dr. Mark Stickney, is Artistic Director.
Veterans Day pays tribute to all American veterans—living or dead—but especially gives thanks to living veterans who served their country honorably during war or peacetime. The concert program will honor all area Veterans and provide a musical salute to thank those who have served and are currently serving. A colorful display of the flags from the various branches of the armed services will be presented. Featured on the program will be several Sousa marches as well as the traditional playing of the Armed Forces Medley, saluting, in order of establishment, the United States Army, Marine Corps, Navy, Air Force, and Coast Guard.
We are hoping this will occur on November 13 or 14 at Kennett High School. Stay tuned...
"A White Mountain Christmas"
December 3 at 7:00 p.m
First Church of Christ Congregational
North Conway
A musical holiday celebration of "A White Mountain Christmas" will be presented by White Mountain Musical Arts on Saturday evening, December 3, 2021 at 7:00 p.m. The concert will take place at First Church of Christ Congregational, the home of the restored 1984 Moller Pipe Organ. the program is open to everyone who enjoys the music of the season. The nine-year North Conway tradition will again feature Ray Cornils, Municipal Organist Emeritus for the city of Portland, Maine, a post he held from 1990 through 2017. Cornils will be joined by trumpeters Robinson Pyle and Greg Gettel. The program will feature familiar holiday music and an audience singalong.
The annual holiday presentation is designed for the entire family. The suggested donation is $15 for adults. Children accompanied by an adult are free and are encouraged to attend. First Church of Christ, Congregational is located at 2521 White Mountain Highway across from Peaches Restaurant. It is handicap accessible with parking available behind the building.
We are also on Facebook: white mountain musical arts.
We hope to see you in December!
Email ThisBlogThis!Share to TwitterShare to FacebookShare to Pinterest
Home
Subscribe to: Posts (Atom)